You are here. Sure, but where exactly am I? And how do I get where I wanted to go? To act globally and communicate with people from different cultures that’s as if you find yourself thrown into an unknown city: At first, you feel lost and yearn for going home.

Still, you decide to take some small steps. You first try to get some broad orientation. Then you start walking and get to know individual places or quarters. After some hours you take a break, sit down on a bench or at a Café and watch people passing by. Maybe you ask people for direction and you get to know them to be very kind, even though you do not understand where they advised you to go. Or you take public transport to go to a museum or an exhibition and by that you learn how the city is organized. 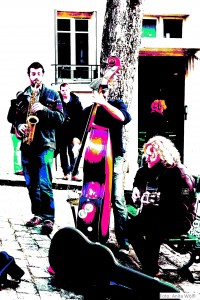 A few days later, you have a first impression of what life is in that city. You no longer perceive previously unknown things as strange, but start to accept them as just being different. You may appreciate their favorable aspects and even start missing them at home. So, the more you learn about this previously foreign city the more easily you find your way around. You want to know more and are looking forward to tomorrow’s experiences. And after some weeks you may already feel at home and don’t want to leave.

With this blog, I would like to take you by the hand and together, in small steps, we will discover the really big city, the world, and the people living there.

globali, these are first of all the first syllables of the word “globalization”: companies have spread plants all over the world and compete globally for the best employees. Goods production and services involve firms from a multitude of countries. Hence managers and employees communicate almost daily with colleagues, suppliers and clients worldwide.

globali, this is also how one may pronounce the word „globally”. To really act globally, it is not sufficient to communicate in a common language. People around the world do things differently, such as developing a line of argument, giving feedback, taking decisions or perceiving authority.

globali, this is finally a play on word with „Globuli“, i.e. the name of a German firm producing homoeopathic drugs in the form of tiny balls. These are meant to help the human body to help himself by strengthening its own defense system. Beyond fighting the illness now, they should thus also reinforce the body’s immune system against potential pathogens in the future.

Hence, the aim of globali is to help you help yourself so that you find more easily your way in the world and with people from other countries or cultures – as said above in small steps:

The first step: find your way in the world

For this purpose, you will find different blog posts to three broad topics:

People: Some interesting things to know about how we people in the world think, act and communicate – a psychological approach to the world.

Impressions: Anecdotes, experiences, adventures and all sorts of impressions from different countries and cities – a touristic approach to the world.

This is not always easy. I know from my own experience that in an international environment, misunderstandings can occur quite quickly, with possibly dire consequences.

Don’t worry,  I will gladly accompany you as coach or consultant. Read here more about my services.

You want to know to which city the citymap in the slider belongs, then click here: