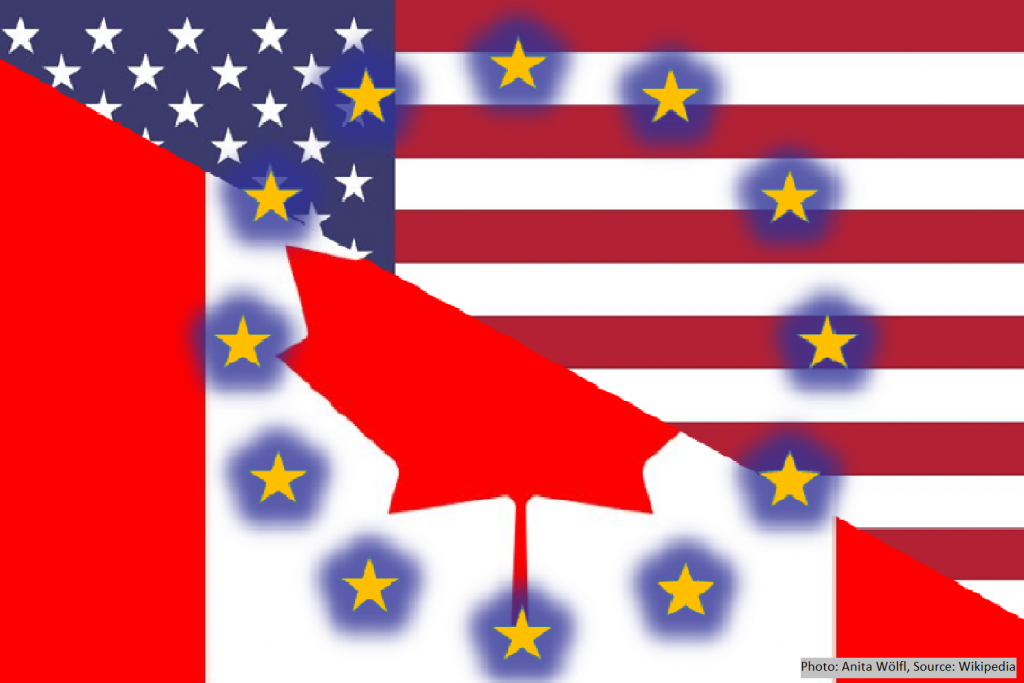 When I open German newspapers these days, what strikes me is the apparently very high and increasing German opposition against the EU-US trade agreement TTIP or the EU-Canada agreement CETA. Just last weekend again hundreds of people demonstrated against these trade agreements in Germany.

Much of the criticism brought forward appears to me to be more or less hidden expressions of fear. Recurrent examples are fear of genetically manipulated crops from the USA, fear of a loss in competitiveness of German manufacturing and agriculture, fear of less stringent product, services and labor standards and fear of loss in jobs. And what appears to come up again and again is the more general fear of loss of national independence or of excessive intervention in domestic policies.

However, in a globalized world where economies are increasingly interconnected, who should know whether individual domestic trade or industrial policies benefit domestic firms? While in their immediate effect they are surely aimed to be beneficial, indirectly the opposite may be the case meaning that they may turn out to be rather harmful or counterproductive.

Why is this? Because we are no longer living in a world in which international trade consisted of nationally produced final goods shipped across borders for final consumption. No, as Jenny explained at the example of the iPhone5, production now takes place through Global Value Chains (GVC): Before an iPhone is sold in the (virtual) stores it had been travelling from one country to another with yet another component being added at every stage.

What does this mean? First, international trade through global value chains implies that exports needs imports. Figure 1 illustrates this very nicely at the example of the electrical and optical equipment industry – the sector which is closest to Jenny’s iPhone story. In 2011, the most recent year for which these data are available, foreign value added, i.e. intermediate imports on any stage of the production process, accounted for around 40 per cent of the value of gross exports in electronic and optical goods.

The share is typically smaller in large exporting countries, notably the United States, where domestic firms find substantial natural resources, capital, infrastructure and qualified labor to produce specific intermediate goods so to say “in-house”. In contrast, in smaller countries, firms specialize in these goods and services (or rather tasks) where they are best in. They would then buy components from elsewhere without having to develop whole markets or industries.

Since 1995, the first year for which these data are available, economies appear to be more and more interconnected; on average across countries the share of foreign content has been increasing and its lower and upper bounds have been converging. Less developed countries increasingly get involved in global value chains to benefit from access to networks, capital, technology and knowledge, thus strengthening development. And firms in emerging economies, notably China, are now able to produce intermediate or final goods in higher value-added branches.

What makes the TiVA Database by the OECD and the WTO used here so interesting is that it measures trade in value added terms along the whole production process. Hence, it does not consider the actual value of the imported intermediates once they are shipped, but only that part of the value that was added by each individual supplier. And it does not only consider the very last shipment, but several stages up and down the supply chain.

So in the end, these data tell us what is produced and used when and where with which value. This helps us to illustrate in Figure 2 the second main consequence of international trade through GVC’s: Goods cross borders many times – as raw materials, intermediate inputs or final goods. Today, value chains are indeed global.

Sure, distance matters. Imported intermediate goods and services mainly come from other countries within the same region. European firms import mainly within Europe, firms in Japan and China within East and South East Asia and Canadian firms from the USA.

Still, ever falling trade, transport and communications costs appear to open up access to foreign intermediates also from outside the region. With one exception though: European firms do not appear to be very attractive for firms in Non-European countries yet, neither upstream nor downstream the value chain. Especially, this appears to be the case for the Europe-North-America-axis.

I think these results make it rather obvious: The time for protectionism is clearly over. For firms to be competitive policy needs to reduce barriers to trade along the global value chain. And this can best or even solely be achieved through multilateral trade agreements.

Thereby reducing barriers to trade does not only mean lowering tariffs. It also means opening up services markets, lowering administrative and regulatory burdens and reducing uncertainty. Interestingly, TTIP and CETA aim to address exactly these issues.

A very comprehensive analysis which was also main source for this post:

All you need to know about the OECD/WTO TiVA-Database, i.e., idea behind, data used, indicators, measurement, etc.

And here some links on  TTIP and CETA:

And on the internet pages of the Federal Ministry for Economic Affairs and Energy, Germany: